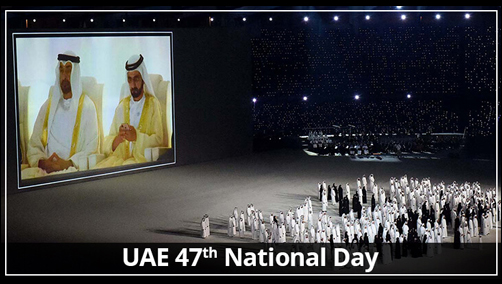 Posted at 06:32h in Newsletters by sun-impex 0 Comments
0 Likes

Paying reverence to the union of the seven emirates, a splendid display of colours, patriotism and traditions was organized in the capital of UAE. It had to be a grand celebration as the country celebrated the occasion of its 47th National Day on December 2, 2018. The stage was already set for dazzling performances by artists who amazed 22,000 spectators present in audience with their every move.

Also present at the splendid occasion were Sheikh Mohammed bin Rashid, the Vice President of UAE and Ruler of Dubai; Sheikh Mohammed Bin Zayed, the Dubai Crown Prince; and Deputy Supreme Commander of the Armed Forces.

A lot of intense hard work and dedication was put by singers, dancers and puppeteers for the rehearsal of the National Day event. People from across the country arrived hours before the celebrations at Zayed Sport City Stadium to participate in the grand celebration.

For ‘Greening of the Desert’ performance, the stage was creatively transformed into a desert where giant puppets of flamingos, Houbarass bustard, gazelles, desert fox and other wildlife made appearance. A beautiful poem created by Sheikh Zayed describing the magnificence of blossoming flowers and the beauty of palm was also chanted by a choir which brought a magical vibe to the surrounding aura.

Throughout UAE, several people even decorated their car hoods with flags, stickers and other National Day-theme items for the big day. From massive public gatherings to spectacular showcases and stunning art exhibitions, UAE’s Capital witnessed a grand celebration on its 47th National Day.