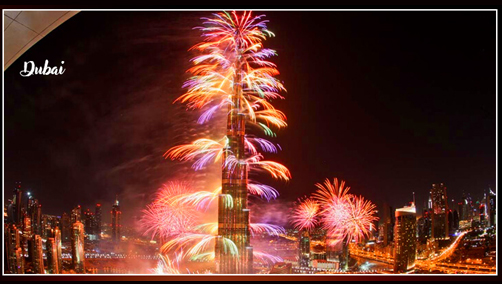 Posted at 07:37h in Newsletters by sun-impex 0 Comments
0 Likes

Here’s some exciting news for Burj Khalifa lovers – This year’s New Year Eve will be even more happening & enjoyable with the return of splendid fireworks at the Burj Khalifa.

Fireworks display used to be a massive means of entertainment for the visitors until the scheme was replaced by a laser light show by officials on grounds of safety reasons. However, December 31 this year will witness even more incredible fireworks from the world’s tallest building.

Previously, officials released a statement explaining the safety of lasers compared to fireworks. Possibly, the officials may have been right if it was regarding the safety of the gigantic building structure and on-lookers. However, the decision has taken a U-turn and it will be back to the basics now. The officials admitted that high demand of fireworks brought the event back to life at the Burj Khalifa.

Water-music performances from the sizzling Dubai Fountain will further add more glitz to the New Year’s Eve gala this year. Arrangements are even planned to set up special viewing platforms across downtown Dubai so as to ensure an optimally grand viewing experience to visitors.

The celebrations would be even streamed LIVE on television and one of the most popular social platforms “Twitter”. So, indeed, the New Year Eve celebration experience would not only be magnificent & entertaining but a memorable one for visitors coming to Burj Khalifa on this Dec 31.