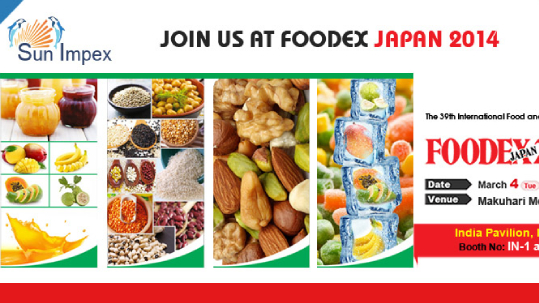 Sun Impex is participating at Asia Pacific’s largest food exhibition, the Foodex Japan 2014. The 39th international food and beverage exhibition brings together the Japanese as well as the global food industry under one roof.

Since 1976, the inception year of Foodex Japan, this exhibition has transformed itself into an important trading hub. As the largest platform of the Asia-Pacific region, Foodex Japan offers trending setting innovations in the food industry, and liberal exchange of ideas among global thought leaders. Foodex is not just a Japanese show, but one that attracts global players. Last year’s edition attracted some 2,544 exhibitors, with 1036 Japanese and 1508 overseas exhibitors from over 67 countries and regions. These numbers will only increase this year, thus indicating the scope of business opportunities available here for exhibitors, buyers and visitors. With this exhibition, we intend to make our presence felt in the Japanese market. The quality and production standards of Japanese food market are highly competitive. The event, therefore, hosts excellent opportunity to explore and understand the dynamics of the complex Japanese food industry. Japan is world’s third-largest importer, after United States and the European Union (EU) with 60 percent of its food being imported each year. Moreover, Japan’s processed food and beverage imports go over $7 billion, which make it a viable market full of possibilities. For this year’s edition we are displaying products that include fruits and vegetables, flavours and colours, exotic spices, oilseeds, grains, pulses and wholesome nuts. Products to be displayed at Foodex Japan 2014