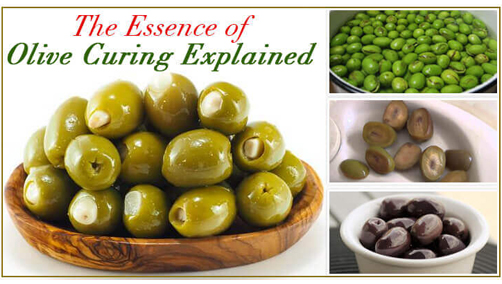 11 May How Olive Curing Contributes in Making Olives Palatable?

Posted at 10:05h in Newsletters by sun-impex 0 Comments
0 Likes

Fantastically diverse, olives have been a component in human diet for a long time. While few decades ago, only some varieties of olives were known, now there are multiple varieties like green, black, pitted available for nurturing the platter with more olive goodness. The sweet, sour, salty, bitter & pungent flavours of different olives makes them quite versatile to be tossed into salads, ground into spreads, simmered in stews & sauces, simply relished raw.

Technically a drupe, olive comes under the fruit category. On the interior, they have a single large stone and loads of harsh-tasting Oleuropein – a compound that imparts intense bitterness to olives. Despite being a drupe, olives lack the typical sugar content that is typically loaded in other drupes like cherry and peaches.

The highly bitter olives may not be so pleasant to taste raw and hence essentially undergo a curing process in order to make them perfectly palatable. Olive curing brings in the characteristic saltiness, tender texture, & flavour that we relish in the modern-world olives. More like fermentation, olive curing involves olive’s natural sugar converting into lactic acid and is done in any of the five major ways – Brine-curing, Water-curing, Dry-curing, Lye-curing and Sun/air curing. Each process derives its name depending on the medium used for curing.

While Lye-curing is the most massively adopted process, sun curing and water curing are done in the rarest case. Invented in Spain, the cost-effective, quick lye-curing process involves immersing raw olives in alkaline lye solution. Dark purple or black olives are fermented using Brine curing that intensifies the flavours considerably. In Dry-curing, olives are packed in salt for one month or longer. As salt pulls out the moisture & bitterness, dry-cured olives bear a wrinkly, prune-like appearance.