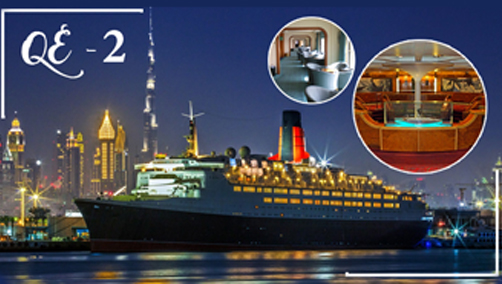 Posted at 09:04h in Newsletters by sun-impex 0 Comments
0 Likes

Built in the great shipyards of Scotland in 1967, Queen Elizabeth II, also known as QE2, is finally set to reopen as a floating hotel in Dubai. Considered one of the most majestic ocean liners, QE2 truly mesmerizes with its sheer beauty and grandeur. The splendid hotel will provide visitors the opportunity to rest in royal suites where the great Queen Elizabeth II rested with her mother once upon a time.

QE2 hotel’s rooms bear the unique touch of sixties with their dark wooden panelling. The luxurious rooms will be available for $150 per night. Walking on board may take you back to the time when the 963-ft ocean liner marked her maiden voyage.

The 13-deck hotel has most of its original features preserved. Visitors will find the QE2 exhibition space right next to the lobby where they can get more acquainted about the ship as it was during the 60s. Overall QE2 may bring along the feeling of being more of a museum at the first place and then a luxury-studded hotel – which would be still enjoyable to many.

By the time QE2 was sold to Dubai for a whopping $100 million, the majestic ocean liner had completed 25 world cruises and 812 Atlantic crossings carrying 2.5 million passengers. Almost 2.7 million man-hours have been spent in transforming this iconic ocean liner into an attractive tourist destination. The efforts are surely going to pay off as the floating hotel impresses global tourists in the time ahead.

With 16 million tourists visiting Dubai in 2017, the launch of QE2 is expected to boost the city tourism further. Surely, one must take a tour of this amazing floating hotel on visiting Dubai.