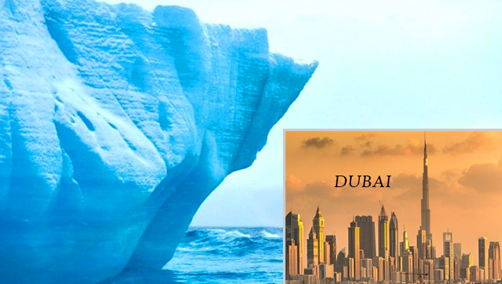 Posted at 10:25h in Newsletters by sun-impex 0 Comments
0 Likes

UAE, a country well-known for its wealth and their engineering marvels like the biggest indoor ski-slopes, artificial islands and the tallest building in the world is now planning to drag a massive chunk of iceberg from Antarctica. The motive is to ease the stress of a drinking water shortage in the Middle Eastern countries, and much of the transcontinental region as some studies suggesting the drought could last for many more years.

The firm has drawn up plans to harvest icebergs in the southern Indian Ocean and tow them 5,700 miles away to the Gulf, where they could be melted down for freshwater and marketed as a tourist attraction.

A scientific committee is now being set up consisting of scientists, experts, and specialists in the nature of Antarctica, icebergs and marine science, as well as initiating collaboration with water research centres and universities worldwide because the plan to harvest icebergs faces a wide array of legal, financial and logistical hurdles. So before any steps could be taken the project needs to seek government approval and follow environmental regulations.

There is no surprise that the idea would generate in Dubai after so many engineering achievements but the idea is for a much greater cause this time. The iceberg is said to contain about 20 billion gallons of water and is expected to end the water shortage for the next 25 years. The project is also said to cause rainstorms from the cold air gushing from the icebergs.