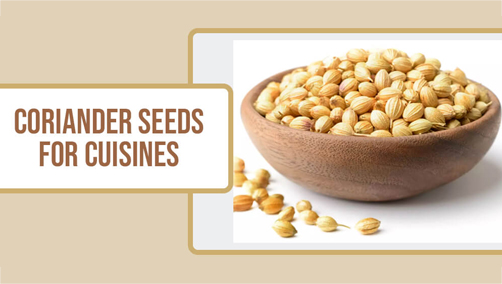 Posted at 07:42h in Newsletters by sun-impex 0 Comments
0 Likes

Often confused with its look-alike Cilantro or Chinese parsley, Coriander has a distinct appearance altogether. Whether in form of leaves or seeds, Coriander is used extensively in worldwide food preparations. Coriander seeds are as crucial as the leaves of the parent plant. While the leaves are usually referred as fresh coriander, the word “coriander” may refer to the dry fruits or seeds only when it comes to food preparation.

Crushed coriander seeds produce a lemony citrus flavour often described as nutty, spicy and warm by food enthusiasts. The typical aroma and flavour of coriander though is due to the polyphenols and terpenes contained in its essential oil. Dry coriander seeds can be roasted in dry pan to enhance the overall flavour, aroma, and pungency. Roasted seeds can be even relished as snacks.

Original flavours escape swiftly from grounded coriander if kept stored for long; hence the seeds are grounded fresh to avoid flavour loss. Typically used as an essential spice in Indian cuisines, coriander seeds have a reputation for enhancing flavours of curries and vegetables, provided a balanced amount is used in food preparation. Using slightly excessive coriander in any recipe has the potential of spoiling the overall flavour. These are a crucial ingredient of two popular South Indian cuisines, Rasam and Sambhar.

While coriander seeds are used in sausages in countries like Germany and South Africa; these form one of the ingredients in preparing bread in Central Europe and Russia. In North America, the powdered seeds are used as condiment while leaves serve the purpose of salad. Certain styles of beer too are brewed using coriander seeds.