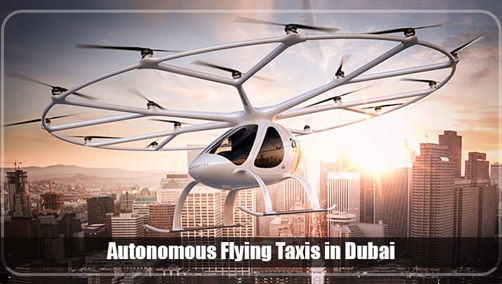 Posted at 07:10h in Newsletters by sun-impex 0 Comments
0 Likes

Investment in cutting-edge technology has become quite usual for a grand city like Dubai; same being evident from the German-made electric Volocopter set to fly through the Dubai sky in coming time. The pilot-less helicopter is all set to ease the already-clogged Dubai highways by placing passengers in the air.

With a tested maximum airspeed of 100kph, it may even become the quickest mode of transportation for the city. Dubai’s Road & Transportation Authority (RTA) has reportedly invested a hefty amount in the battery-powered Volocopters and is all geared up to formulating new laws for this new mode of public transportation in coming 5 years.

The innovative public transportation can be ordered as per requirement by paying for the entire trip. Astonishingly, the total trip fare is reported to be less expensive compared to a car. The unmanned flying taxis not only prove effective in terms of resolving road congestion problem but also in shrinking infrastructure development related costs.

On a daily basis, more than 1.5 million vehicles swarm on the Sheikh Zayed Road during peak hours. The congestion includes dense gridlock causing prolonged frustration for the several people struck on road. With Volocopters flying all around, such situations in the city may be controllable.

However, encouraging & convincing city people to go for public transportation would be a major challenge ahead for sure. That’s crucial because no matter how many such unmanned taxis get into the sky with a noble aim of shrinking road congestion, unless people start relying on a technology like this, it may be of less use.