A Sneak-peak into the Incredible World of Healthy & Delicious Oats 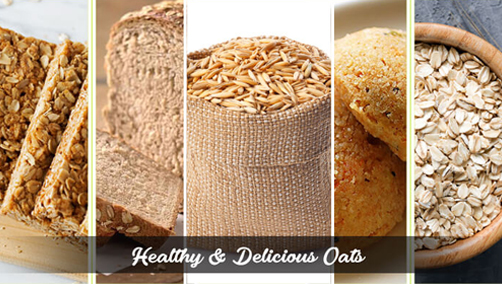 Posted at 06:57h in Newsletters by sun-impex 0 Comments
0 Likes

With weather turning colder, a bowl full of delicious oat meals may look like more than just breakfast. The rich nutritional profile of oats combined with their deliciousness makes them a perfect meal for many.

A species of cereal grain, oats are popular worldwide typically as rolled oats and oatmeal. Though oatmeal is consumed primarily as porridge; these find diverse applications in baked products as well including oatcakes, oatbread, and oatmeal cookies. Oatmeal cookies taste phenomenally good if just made from the right set of ingredients. Oat flour is processed into noodles and consumed as staple food in some parts of China, especially Shanxi province.

Applications of oats are not merely confined to cuisines. These are often commercially used in Britain for brewing beer. Prepared from oatmeal, ale and spices, “Oatmeal caudle” used to be a traditional drink in Britain. Properly ground oats are used in preparation of “Avena” – a sweet, cold drink relished as refreshment in Latin America.

The delicious cereal grains are cultivated across the globe with crops generally requiring greater rain tolerance and lesser summer heat requirement. Being annual plants, oats can be planted in two ways – either in autumn or spring; with late summer harvest planned in former case and early autumn harvest planned in latter case.

Oats grow best in temperate regions across the globe, especially in European Union states, Russia, Canada, Poland and Australia. Russian oats are world-renowned for their unmatched flavour and quality.

Sun Impex brings to you the impeccable flavour and nutrition of Russian oats at the most competitive rates. Place your order now!